What’s Happening in Our World?

The Rev. Sam McGlothlin wrote a liturgy lamenting the deaths of Black men and women at the hands of police for a class project.

Four years later, McGlothlin pulled out the prayers. They were needed again.

McGlothlin, no longer a student at Vanderbilt Divinity School but an associate pastor at Belle Meade United Methodist Church, was searching for a way her congregation and community could respond to George Floyd’s death together.

The 46-year-old Black man died May 25 after a white Minneapolis police officer pressed on his neck for nearly nine minutes. His death shocked many Americans, spurring ongoing nationwide protests and calls for change.

Belle Meade church leaders and members decided to hold an outdoor prayer service June 5 and invited a cross section of the community. They decided to use the liturgy McGlothlin wrote that used both words and movement, but it needed updating.

“We thought that to do those prayers together in person using our bodies was a way that we could pray and sort of put ourselves in the positions that some of these people have been put in to really feel what that must have felt like,” McGlothlin said in an interview with The Tennessean.

“We fall to one knee and remember George Floyd, who was killed in broad daylight, who said ‘I can’t breathe,’ who called for his mama, who pleaded for his life. We remember the horror and terror Black men and women have endured at the hands of white people. And now we hold silence for 8 mins to honor his life, not his oppressor.”

Titled the “Embodied Prayers for Pardon and Power,” the liturgy, a script that helps a group move through a communal prayer together, is now available to the entire United Methodist Church.

The second-largest Protestant denomination in the U.S. is in the midst of a global church initiative to dismantle racism. McGlothlin and Smith’s liturgy is among the resources that have been compiled online to help United Methodists end racism and advocate for racial justice. Other efforts are underway in the local church, too.

“Words are great, words are important — but action is really important,” Bishop Cynthia Fierro Harvey, president of the United Methodist Church’s Council of Bishops, said in a June news release announcing the initiative. “Pick up your pen, pick up your voice, pick up your feet, and do something.”

On June 5, a crowd gathered on the grass outside the Belle Meade church. McGlothlin, Smith and two other United Methodist ministers, the Rev. Jim Hughes and the Rev. Stephen Handy, led everyone through the liturgy, praying for victims of brutality and moving their bodies.

Together, they touched their necks as they remembered Eric Garner; they touched their backs for Freddie Gray; they held out their hands for Tamir Rice; they lay on the ground for Sandra Bland and Breonna Taylor; they looked at their shoes for Ahmaud Arbery; and they took a knee for Floyd.

Then they prayed to God for strength to do more.

McGlothlin said she hopes the prayers are a jumping-off point for people, “a moment that can create a movement.”

At the Belle Meade church, plans are underway for continued work on dismantling racism, including a community reading project, McGlothlin said.

Smith urges people to examine their own implicit biases and build a relationship with someone from a different walk of life who can offer an honest perspective and point out blind spots. Get the Coronavirus Watch newsletter in your inbox.

Updates on how the coronavirus is affecting your community and the nationDelivery: VariesYour Email

Reach Holly Meyer at hmeyer@tennessean.com or 615-259-8241 and on Twitter @HollyAMeyer.

Lord, give us the strength and courage to continue to bear living testimony to your trans-formative power in this world of pain, praying and crying in solidarity with our brothers.

And answering the King, he will say unto them, Verily I say unto you that as soon as you did it to one of these my youngest brothers, you did it to me. Matthew 25:40. by Myriam Cortes

An Open Letter to My Fellow White Christians.

NASHVILLE — Since long before it was a country, our country has been in flames. When we arrived on our big ships and decimated this land’s original peoples with our viruses and our guns, when we used our Christian faith as a justification for killing both “heretic” and “heathen,” we founded this country in flames. And every month, every week, every day, for the last 400 years, we have been setting new fires.

Our pastors don’t tell us that anymore, but we are still setting fires.

Christians set a fire every time we allow our leaders to weaponize our fears against us. We set a fire every time our faith in good police officers prevents us from seeing the bad ones. Christian voters preserve a system that permits police violence, unjust prosecutions and hellhole prisons filled with people who should have received the same addiction treatment we give our own troubled kids.

We set a fire every time we fail to scrutinize a police culture that allows an officer’s own fear and hatred to justify the most casual brutality against another human being. It would be almost unbelievable to match an adjective like “casual” with a noun like “brutality,” but we have seen the videos. Watch the faces of justice shove an old man aside and leave him bleeding on the ground. Watch them drive their vehicles into protesters protected by the United States Constitution. Watch them fire rubber bullets directly at journalists doing work that is also protected by the United States Constitution. In video after video, note their unconcern with people who are bleeding or screaming in pain.

Make yourself look. Study the air of perfect nonchalance on Derek Chauvin’s face as he kneels on the neck of George Floyd. Register the blithe indifference in his posture, the way he puts his hand in his pocket as though he were just walking along the street on a sunny summer day. Nothing in his whole body suggests concern. He is not the least bit troubled by taking another human life.

Every single aspect of our criminal justice system is permeated by racism, but too many Christians continue to vote for “law and order” candidates anyway, failing to notice that more cops and more weapons and more prisons have done exactly nothing to make us safer. Failing to notice that they have instead endangered all Americans, but black people most of all.

We should know better by now. There are so many resources to help us know better, yet too many Christians ignore the history books that document the terrible legacy of slavery. We ignore the novelists who tell us why the caged bird sings. We ignore the poets who teach us the cruel cost of a dream deferred. In our carefully preserved ignorance, we pile all their books up in a great pyre, and we set them on fire.

We have to stop letting this president turn our faith into a travesty. Love is the only way to put out this fire, love and listening and the hard work of changing, but this “Christian” president doesn’t want to put out the fire. Fire is his home-place. Fire is his native land. Perhaps it is ours, as well.

There are positive models for what Christian faith in the public sphere can look like. Think of John Alexander, a Baptist philosophy teacher who published a journal designed to convert white evangelicals to the cause of civil rights. Think of the Rev. Daniel J. Berrigan, a Jesuit priest who opposed the Vietnam War. Think of the Rev. Jennifer Butler, a Presbyterian minister who founded the activist group Faith in Public Life. Here in Nashville we have the Rev. Stacy Rector, the Presbyterian executive director of Tennesseans for Alternatives to the Death Penalty, and the Rev. Becca Stevens, an Episcopal priest and founder of a nonprofit group that works to “rise up against systems that commoditize, criminalize and abuse women,” as the Thistle Farms website puts it. There are many, many others, all across the country.

Our sins are grievous, but these Christians remind us that we are not yet beyond redemption. It is time to act on what we say we believe. We need to remember the words of the prophet Isaiah: “And they shall beat their swords into plowshares, and their spears into pruning hooks.” We need to remember the words of Jesus — “Blessed are those who are persecuted for righteousness’s sake” — and join the righteous cause of the protesters. For theirs is the kingdom of heaven. 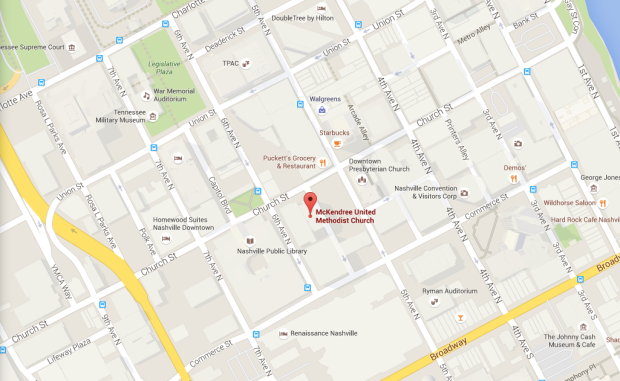 
Join Us for Online Worship

Give to McKendree Church

Give to Restoration Pointe